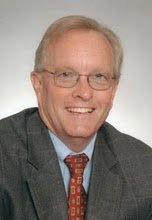 Danny O’Malia has spent a lifetime in and around the retail grocery business. He began learning about Customer Service from the master, his late father Joe O’Malia, at the age of 8, when Joe owned a small grocery store in Broad Ripple that actually failed. Later he worked part time for his dad at Preston’s at 71st and Keystone and, starting in 1966, at O’Malia’s.

Danny left a 6-year career as a junior high and High School English teacher in 1975 to join the family business at O’Malia’s full time. Joe was 55 years old by then and looking to slow down a bit. So Danny became involved in many aspects of the business gradually. Everything he learned had CUSTOMER SERVICE woven into it. From handling complaints to writing ads designed to explain how O’Malia’s differed from “the big boys,” SERVICE—and how to motivate employees to give it—was always Danny’s clarion call.

Danny served as President of O’Malia’s from 1986 through 2006, the last 5 years as part of Marsh Supermarkets. He brought this lifetime of customer service experience to Trustpointe in 2007 to spread the gospel of building a Culture of Service to as many companies as possible. In 2009, he has added keynote speaking to his customer service training programs and started his own company, Indy’s Trusted Servant.

Danny is back on the radio!